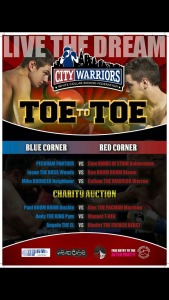 It was a win for Paul last night at the Stratford Town Hall at the 3rd of his white collar boxing events, this event was hosted in support of Headcase and we had 3 really good auction items which raised £660. Thank you to Peter Burnett and Ross Hayward of EdBroking and Alex Gray of Millers for their kind bids.

Do you remember you supported Headcase Charity a couple of years ago? You read the blog, you reposted the Facebook updates, you Liked the stories of injuries, training, diets, operations, results and best of all you donated as the months passed leading up to the pitching of aging bodies against the challenge of Ironman race.
Can we call on you time and support, – and hopefully spare cash once again. We raised nearly £50k over 18 months, comprising a variety of events, auctions, culminating with the Ironman race in Nice. This enabled us to support a full time PhD researcher for a year to find a cure for GBM brain tumors. Still 100% fatal with average life sentence of 14 months, yet only gets 0.01% of total U.K. Charity fundraising to try and find a cure.

It’s on again, 13th May 2017. Join the journey and support the efforts to raise funds again to continue the quest to find a cure. No money is taken in Administration fees, and it’s a real direct effect you will be having.

Your involvement in likeing, reposting, tweeting, commenting as well as donating will help the pain seem worthwhile.

Read the story thus far on this blog.

So I’m averaging 25k per day on the bike double on a Sunday, running is a problem as I have a knee injury which is restricting me, but 1or 2 runs a week around 5k a time – no swimming yet, but then that’s always a last minute thing for me. So by the time I reach the start line for my ‘fourth’ half ironman I will be ready, no booze during January but then again I don’t drink much these days. So really looking forward to this one as long as my pedal doesn’t fall off this time !!

So with 145 days to go I have a lot to do. On average I am running and cycling each week. However I am also eating and drinking way to much during this festive period. My plan is to become focused as we start the New Year!! STOP drinking for Jan and make this thing happen.

How many weeks until… 23 weeks

How many months until… 5 months

So I am not sure I can go a whole year without supporting and providing some funds for Headcase, it just don’t seem right. So following the hip replacement and recovery, (completed my first race as planned in May) and then completed Blenheim in June, following which the next health challenge arrived…..so an atrial flutter (could of thought of a more manly name ! ) apparently the bottom half of my heart is going three times faster than the top….( some have commented that’s the same as my brain and mouth…..I will let you work out which way round ) Anyhow bit of a drag, so went for a re boot a week ago and it hasn’t worked so next one lined up, does make a difference but allowed to just carry on training, so that’s exactly what is happening….

So next challenge is the 70.3 Half Ironman in Bahrain on November 20th, both Dan and I are going for it…first night time 70.3…under lights ! could be interesting. Soooooooo a little bit of support would be really appreciated, we are currently about 4k off our 50k target so just a little from each will get us to that point….appreciate I have asked before and many have donated but this isn’t going to go away, the progress is gathering pace and great strides have been made from our funding, so please find it in yourself to make a small contribution.

It’s been a challenge to get back to some sort of fitness, but each time I think about that I slap myself and remember what Colin went through, along with many others…..we must just not give up on this so as I have said please help with just a little…..appreciate it !!

So just over 4 months ago I became younger…having a significant body part replaced certainly in my eyes reduced my overall age and got me back closer to my younger brother who has had a total crisis relating to his recent birthday.

Anyhow with renewed vigour I set about preparing for my first race with my new hip…..little did it know when it was cast that it was in for a real test…so far it has travelled over 1800 k in training so it’s passed all its running in tests.

So plan …. Stay under the radar, train and then race and then perhaps depending on the outcome re visit the charity pages for another crack at helping the fight against the terrible disease that claimed our mates life. Then bang Dan goes viral with his tale from last year and it restarts the mission !!!!!

So having for nearly my entire life been an old school trainer ( just volume ) I also decided to get help and indeed settled on the guy that had help Dan smash his last race. So up pops a plan and I start to realise just how unfit you become in a relatively short period of time, in fact the first 1k run I did resulted in two days of almost no movement !!!! Anyhow not being a quitter I have stuck with it and it is getting a bit easier..but still away to go. I am currently a little over four weeks to run until my first race and that’s scary, but it hopefully will turn out to be a great day as that afternoon I am at Stamford Bridge and we may just see some silver wear !

But back to the reason apart from keeping fit and drinking beer, Headcase has become totally connected to each race we do….mostly because that’s where it all started but also because real progress is being made in finding, dare I say it a cure !!!!. It therefore seems easy to help and promote this fight, I have planned several races this year and we will see how it goes, but on December 12th all being well both Dan and I will be attempting the 70.3 in Bahrain, that will be almost a year to the day my new body part joined this fight….so again we ask for any help in terms of donation that you can make, please pass this onto others and get them involved we MUST get this sorted….it just cannot be allowed to take away friends and family on such a regular basis. I made a promise to Colin and I will continue to do what I can to keep it, but cannot do it without you.

After all it’s only money and as a friend of mine once said…..you get it all back and the end of each month !!!!!

Thanks in advance for any help