A very enjoyable day (for one half of the team at least) and another step in the right direction.

After the usual pre race nerves and watching world Ironman champions and Olympians (one of which being the current Olympic champion) start the swim, it was my go. Having still not done as much swimming as I’d like to have, confidence wasn’t at its highest but I knew If I kept a steady pace throughout the 1.5k and didn’t blow up I’d be ok and get out into T1 ready for the bike. Aside from the goggles steaming up and the glaring sun making it almost impossible to see, overall it was quite a good swim and I came out knowing that with a bit more training and some better goggles id be in a pretty decent position come June.

Out of the swim and into T1 I took my time knowing that I needed to make sure I had everything ready as I was about to embark on a 100km cycle. Off to the the bike start I saw my first fan of this years season shouting. Doesn’t matter how many people there are when doing triathlon, when you see someone you know it always gives you a lift and this was no different. I guess that was a good thing as in my head at that point I felt I needed more than just a bit of motivation! A propeller on the back wheel would of been great!

With that said I must admit I really enjoyed the cycle. It was pretty flat overall and quite windy in parts but on the whole I felt great and the 3 hours seemed to go quite quickly. Every now and then you would see the helicopters and motorbikes fly past you filming the elites. Brownlee went past the other way at one point and it still makes me question why I even bother doing this. Having ended up doing an extra lap of Yas Maina f1 circuit by mistake (around 6km) he still managed to break the course record on a day where the wind on the cycle caused the long distance time to be slower by 20mins on last year! Its just unbelievable for anyone to understand how someone can do that, but having taken part in triathlons for a few years now it becomes even harder to comprehend. Super human is really the only explanation…

So off the bike in just over 3 hours I went into T2 feeling surprisingly ok with the legs in pretty good condition. Again my fan and frustrated spectator was there at the start of the run to give me a kick up the arse which was most certainly needed on what was one of the hardest 10kms I have ever put myself through. The sun was beaming down and the temperature was 30 degrees which didn’t help, but the constant stitch and nausea was really the main problem from about 1km in. There were times on the run where I really did question why I do this which is something that doesn’t normally happen and the km markers seemed to be getting further and further away I’m sure of it. Eventually the pain was over and I was through the line to be welcomed with cramp in both legs and a bit of recycled electrolytes to share around 😉 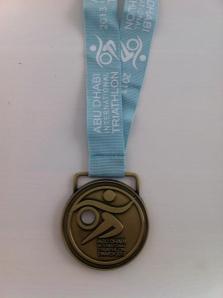 So the focus now is back to a decent block of training to take prepare for the much larger challenge that lies ahead. Short term goals are breaking the 30 minute mark in the 1500m swim on the 15th March and getting the other half of the team back to full fitness.

One last note to say that it seems that the donations are beginning to pick up again which is great news!

Thank you so much to everyone for the support shown so far and lets keep going to reach that target.