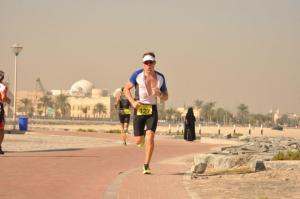 After what can only be described as a very boozy week in Beirut, confidence in preparation for an Olympic distance event wasn’t ideal it must be said but if you wanted to put a positive spin on it, I did get time to rest and replenish my glycogen levels?!?

Anyway, another early start, this time at Mamzar beach park for my 4th event of the year, the usual thoughts were running through my head. Why am I doing this again? Should I go back to bed? I could just do a big training session instead? Thankfully I chose to grow a pair in true ironman fashion and just get stuck in. I’m very glad I did…

The swim was less nerve racking than usual perhaps because I had completed a few already this year, but I had set a target of beating the 30min mark which was at the back of my mind. It was quite a feisty swim with lots of kicking and punching but eventually I got in my rhythm and got out the water in 28mins by my watch which I was more than happy with. In and out of T1 quite quickly I had a bit of a technical issue with my bike AKA falling off! A valid lesson learnt however that no matter how confident you are with mounting your bike, when you try and do too many things at once its only ever going to end in an awkward and embarrassing scenario much to the amusement of various spectators. I finally sorted myself, got my head down and posted a pretty decent time for the 40k which again showed me that I’m improving on the discipline I found the most difficult (we won’t think about the extra 140km ill need to complete in Nice come June for now!)

Feeling reasonably fresh off the bike I pushed quite hard on the run trying to get the heart rate up in order to see where I was at fitness wise towards the end of the 10k. Overall I was pretty pleased and by my watch I broke 45mins which was my secret target before setting out. The goal now for running is just to combine the speed work with endurance and keeping a steady pace for longer period.

So another event down and only one more to go before the season ends here I am reasonably happy where I am at. The heat is now my biggest worry until June given its now 32 degrees here and only going one way (I don’t expect any sympathy btw!) so will need to think about how I deal with that.

Lastly, I’ve been working with our creative director on some cool concepts for the head case charity. I hope to have some ideas to share in the coming months but for now would just like to thank everyone again for their continued support and effort shown so far, its massively inspirational, and also to Colin who never fails to make me laugh with his blog posts.

3 thoughts on “4th race of the season”