Dan: Warm up race number 2 of 2014 found me at the Yas Marina F1 circuit for the Olympic distance and I think its fair to say there isn’t many better venues than this one! The temperature had started to creep up over the last few days to around 30 degrees and with an afternoon start of 3pm, it was definitely going to play a factor. The 2014 wetsuit saga continued before the race as I noticed another tear in my 3rd replacement wetsuit! Just the sort of thing you want to notice 5 seconds before you jump into the water! Either way, I was just treating it as a decent training session and a good test of where my fitness was 10 weeks out from Mallorca.

I was in wave 1 with all the big boys so once the gun went off I held back a little to find some open water which worked perfectly as I had a pretty clean swim from start to finish. I managed to find a decent rhythm after about 500m and just tried to focus on technique rather than speed for this race. I felt pretty good fitness wise but could definitely notice there was a lack of power in the arms which l’ll need to improve on over the next few weeks. Nevertheless, I got up and out the 1500m in 28.13 which, all things considered, was a reasonably decent time for me.

Next was the 40k bike which I knew would be the real test. The biggest issue I currently have with long rides is keeping focused for the entire duration. My mind seems to go wandering at points and I forget to concentrate on my cadence, speed, corner taking etc. Maybe that’s not a bad thing as it keeps me sane but I’m sure ill be able to shave off a few minutes each time if I stop thinking about what I’m going to have for dinner at the 23k mark! Still, overall it was a decent ride and I came in to T2 with a 1.07.14 bike split. 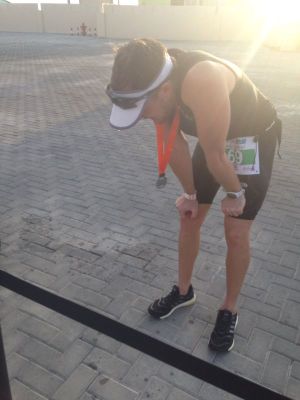 On to the run and I had know idea what was going to happen. I had intentionally set out to have way under the amount of gels and electrolytes for the race (1 gel and 1.5 bottle of electrolytes) in order to see how well I could use my stored energy, which was something that worked well in training for last year. I quickly settled into a usual rhythm and it wasn’t until the  6km mark where I started to feel the effects of not having enough energy on board. I managed to hold on and keep my pace clocking 4.30kms for pretty much the whole way round coming through with a 44.57 10k.

Through the finish line in 2.25.14, I was met by my number 1 fan who had been shouting ‘GO ON DANNY!’ the whole way round! I think the highlight of the day was the fact my race number happened to be 69 and Chrissie proudly wearing the sticker ‘I’m supporting 69’ as if it was some sort of campaign. On a serious note though, you really can’t beat seeing faces in the crowd particularly when you’re digging in, so the news that Nanny and Grandad will be there in Mallorca is absolutely awesome!

Attention now turns to a strong week in the gym building my swim strength and working on my cycling, before a half marathon Friday prior to Russell seniors arrival on Saturday.